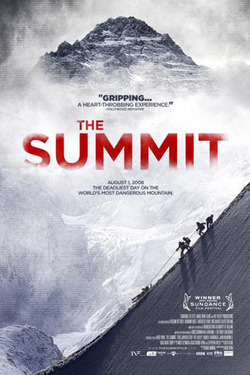 The Summit is a 2012 documentary film about the 2008 K2 disaster directed by Nick Ryan. It combines documentary footage with dramatized recreations of the events of the 2008 K2 disaster. On the way to and from the summit, eleven climbers died during a short time span creating one of the worst catastophes in climbing history. Much of the documentary footage was captured by Swedish mountaineer Fredrik Sträng. Sträng was planning to do a Documentary which was aborted due to the fact that he did not reach the summit. The footage was still valuable to help solving what really did happen since all the climbers had different stories about what happened.