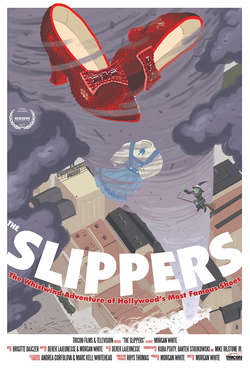 THE SLIPPERS pulls back the Wizard’s curtain on the unbelievable story and cultural impact of Dorothy's Ruby Slippers from The Wizard of Oz.  Through first-hand accounts and archival interviews, THE SLIPPERS will detail the life of the Ruby Slippers after their sale at the famed 1970 MGM auction. Discovered by costumer Kent Warner, it is unclear how many pairs were found and how many pairs exist. That mystery has only helped to propel the shoes to the forefront of the Hollywood memorabilia market. They have been bought, stolen, and coveted by many. They are considered the most important piece of Hollywood memorabilia and the catalyst for the creation of Hollywood memorabilia collecting.