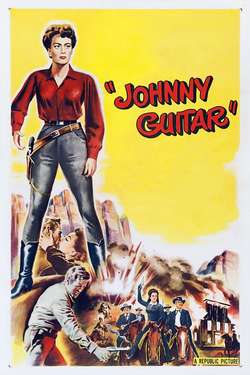 On the outskirts of town, the hard-nosed Vienna owns a saloon frequented by the undesirables of the region, including Dancin' Kid and his gang. Another patron of Vienna's establishment is Johnny Guitar, a former gunslinger and her lover. When a heist is pulled in town that results in a man's death, Emma Small, Vienna's rival, rallies the townsfolk to take revenge on Vienna's saloon – even without proof of her wrongdoing.