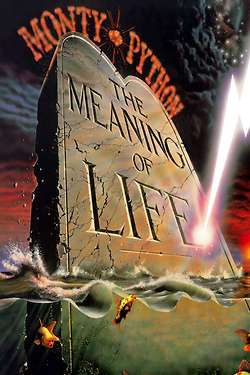 The Meaning of Life

Life's questions are 'answered' in a series of outrageous vignettes, beginning with a staid London insurance company which transforms before our eyes into a pirate ship. Then there's the National Health doctors who try to claim a healthy liver from a still-living donor. The world's most voracious glutton brings the art of vomiting to new heights before his spectacular demise.