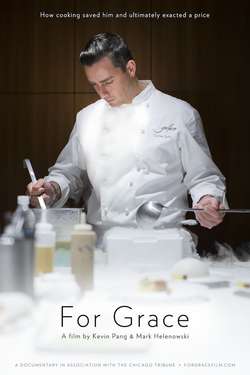 Curtis Duffy, a teen who fought and stole for the thrill, discovered his place in the kitchen after a home economics teacher nurtured his talents. After an unimaginable tragedy involving his parents, Duffy doubled down on his cooking career. Soon, his intense drive earned him accolades as one of the country's most renowned chefs. But as he began building his dream restaurant in Chicago, called Grace, Duffy found himself in another point of personal crisis: His laser focus cost him his marriage and two young daughters. For Grace is a documentary about food, family, sacrifice, and the journey from concrete box to opening night of one of the world's most acclaimed restaurants.