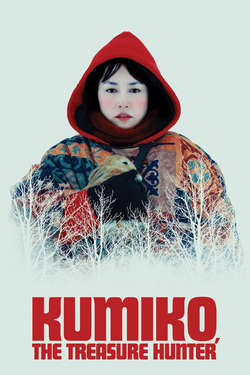 In the massive city of Tokyo, Kumiko, a twenty-nine year old, lives in utter solitude. She works a dreadful, dead-end job under an awful boss, is intimidated by her well-off peers, and nagged incessantly by her overbearing mother who is exasperated by the fact that her daughter is not married or even in a relationship. The only joys in her life come from a grainy VHS tape – an American film in which a man buries a satchel of money in the snowy Midwestern plains - and her beloved pet rabbit, Bunzo. Kumiko is somehow convinced that this treasure is real, and obsesses over its discovery. With a hand-stitched treasure map and a quixotic spirit, Kumiko embarks on an incredible journey over the Pacific and through the frozen Minnesota wilderness to uncover a purported fortune.