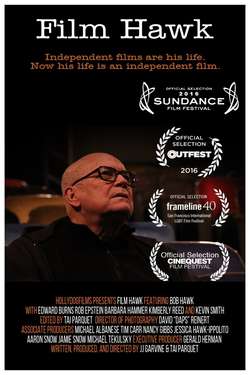 What do filmmakers as disparate as Kevin Smith, Ed Burns, Rob Epstein, and Barbara Hammer have in common? A secret weapon known as Bob Hawk. As a veteran of the American independent film scene since its inception, the cinephile and consultant has been a regular, cherished presence at film festivals and markets for over three decades. Hawk saw promise in scrappy, independently produced films like Clerks and The Brothers McMullen when no one else even knew to look, and he brought these films to the attention of the Sundance Film Festival, thereby launching multiple careers in the process. An unsung champion of new voices, he has discovered innovative work, nurtured new talents, and brokered relationships with film festivals and critics alike, while staying out of the spotlight—until now. At 75, Bob Hawk looks back on a still-vibrant life in independent film, exploring how the rebellious gay son of a preacher found his calling as a behind-the-scenes film impresario.